Every time I come to Nendaz, it’s killing me mentally. Different to other Freeride Competitions, there is a Qualification run, sometimes even two, which decides if one is allowed to ride and show skills on the beautiful Face of Mont Grand.

If you are not making it through the Qualification, you will still have a really nice day watching everyone riding, but one also will regret to not have ridden better…like explained here 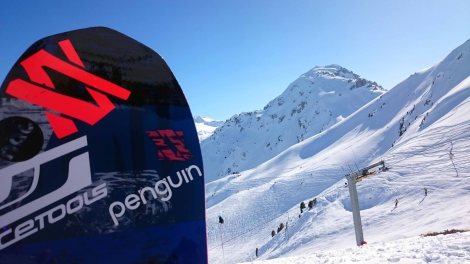 This time I made it through, barely, as the 5th rider out of 6 who qualified and out of 17 who got a starting spot in SNB Women’s category. Not a very spectacular qualification run, but a clean one. It really helped me, that I competed in a small local Freeride competion, the Loser Bier Contest the weekend before, where I had to ride two clean runs, which were counted together for the final result.

And it also helped me quite a lot, that I remembered from previous years which were the most common lines and how the sun influences the snow conditions on the Qualification Face over the course of a day.

The night before the final run I slept really good, then got up at quarter to six and took the car together with Schöffi, Seeb and Sam to the Siviez Gondola to get to our rider’s meeting. No stress for me, Snowboard girrrls were going last. Sun was shining, and I could hear the roaring of the helicopter and the cheering of the crowd during the slow hike up.

I checked my line, and stopped looking at the face at some point when I felt it would only confuse me. Anna, Maria and me found a nice rock to sit on 50 m underneath the start gate.

We watched our friends start and then listened to the crowd to figure out if it was a good or a bad run. Because of the live judging and the interviews, it took a bit longer than other competitions, so there even was time to eat lunch.

During the final day I didn’t feel stressed at all, but looking back now, I guess I was a tiny bit out of my mind. Not only did I cheer like mad at my own start, but I also didn’t take any pictures of the beautiful view. Neither did I take any pictures of the other athletes or at the party. But I managed to turn my helmet camera on right before the start, so there we are:

If you listen carefully, one can hear that I hit rocks two times during my run. That’s why I left the original sound, but also because I don’t have any good ideas for music. Suggestions welcome, just comment…

And, because Nendaz Freeride had it’s 10th Anniversary, they had even better media work than usual, there was a livestream, a helicopter for some riders and right after the race all the runs were online. This is how my run looked from the other side of the mountain:

By the way: The commentator Mike Aeschbach, a really good snowboarder and a legend, exaggerated my situation in winter a bit: Yes, I live on a mountain hut but I have electricity and also a gondola. Only when I go out for a beer I need to hike up 600 height meters and I need to ride down in the early morning to get to my car:) 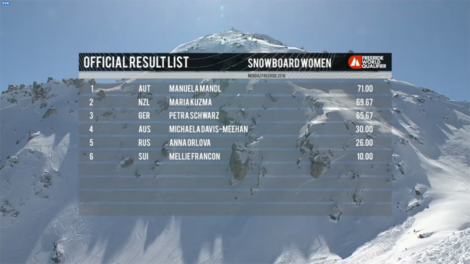 My fellow Team colleague Maria and me were quite close together, after all I took the win, which I’m just really, really happy about. Still can’t believe it, I finally conquered this face and managed to put down a clean run. *HAPPY*

Surreal days high up ... #bergsommer #wanderlust #mountainlove #ridgescrambling
Back at it. ⛰
#BREATHE and #dance aaaand #repeat
Seeking the feeling ... #freedom
Do you dare to reach for the sky?
Hihi - sooo much fun!
#thankyou for all your great birthday wishes!
Always good times regardless the weather with @jessicazumpfephotography 🤗