Well, long time no see on this blog. I was just too occupied living the moment.

There was some real, deep pleasure and some bad suffering throughout the Season. There were many moments, where I couldn’t perform at all, and others, where I never thought I would be able to ride well, but nevertheless stepped it up and showed some good Snowboarding.

So there we go:

You already know what happend in Andorra and Chamonix.

Just as a short reminder: I already crashed before my first cliff in the Andorra Competition, but had a good run otherwise. Still came last.

And then I pulled it together and became 3rd in the Chamonix Comp staged in Andorra. Quite a good run, but I was not relaxed at all during riding.

Then I went straight to Kirgistan, for extensive splitboarding. One crazy week, quite exhausting, but brought me closer to my normal me. The Article about that adventure will be posted at some other time. Just that much: Horses, powderturns, walnuts, excessive amounts of black tea and an extraordinary crew.

After that, I visited The Mons House in Saalbach Hinterglemm. #theMonsHaus was organised by my Sponsor Mons Royale, to gave us Freerideworltour Riders some freedom and fun times to prepare for Fieberbrunn. And, for sure, we also went filming. Full Article HERE.

Right before Fieberbrunn I took part in the 4* Freerideworldqualifier CGC Jasna Adrenalin in Jasna/Slovakia.

I really like that place, it’s not expensive, the mountains are seriously steep and there are some great coloirs. Every now and then, there is a little problem with the weather, and there is hardly ever any deep powder during the competition. But as I love it steep and gnarly, it’s the perfect place for me. And they also have great Craft beers for a reasonable price.

And the whole trip was another chance for me to hang out with my female shredcrew, the Radheidis. Already getting there was great fun, car dance at it’s best. We arrived late, and there was already a massive party, before the competition even started.

Well, and I won the Competition there. And actually came to Fieberbrunn full of self confidence and pretty happy.

Ana Salvador Aguas on 3rd, Me on 1st, Anna Orlova on 2nd

In Fieberbrunn I messed it up, lost my head at the start and changed my line, because I didn’t wanna go, where everyone else was going. And because of that, I had too little features and just missed the podium. And didn’t make the cut to Alaska. And I also didn’t requalify for next Season.

At that point, my soul and my body were tired. My left Diva Knee was hurting, and I just couldn’t stand the pressure. 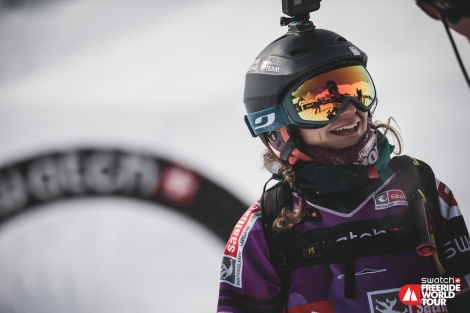 So straight from Andorra we, Mikaela Hollsten and me, drove to Nendaz Freeridequalifier 4*. To try and requalifiy for next Season. Cause I just wanna keep snowboarding all Winter long (and have a good excuse and some financial stabilty doing that)

Back into known waters. After the relative mess in Fieberbrunn, I was actually able to get over it quite fast.

There still was the possibility for the requalification, just needed a win in a 4* and get better results than my good friend Anna Orlova.

I really hate it to battle against one another, and I still wish, I just would have had made the cut straight in the Freeride World Tour. Anna is doing the Competitions pretty much as long asme, she is a good rider and she would’ve really earned to get on the Freerideworldtour.

So, for a chance to make the cut, I needed to win another 4*. And in Nendaz, there is a pretty though qualification, less than 50% of the riders get into the Final on great Mont Gond. Not the best chances.

The snow was extraordinay bad, like tracked, iced crust as it had rained into the Quali Venue. But I felt really good, nailed my run (a bit more style and pop would’ve been good though) and won the Qualification.

Next day the final was scheduled, but first Mont Gond needed to be secure. So it was bombed and it all came down. No Final. And only the points of a 3* – not what I needed. But I spent the Final Day hanging out in the VIP Area on the Mountain and having fun with all those winter friends. Love the frenchies. 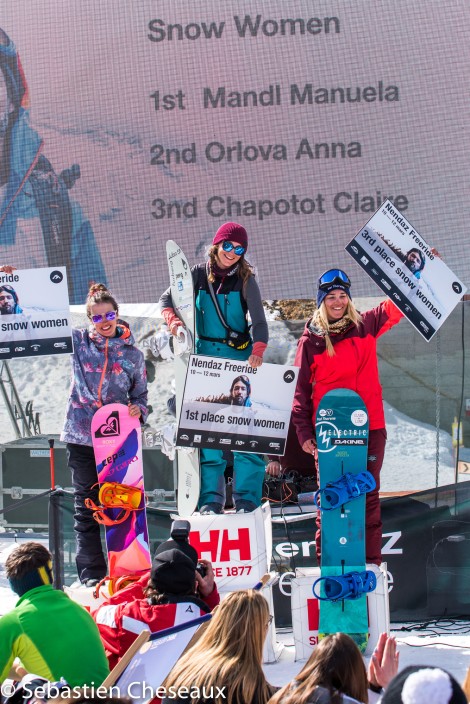